But his status is not updated apparently; he's still considered 'unvalidated' there.. :/

In less than 20 days, he may become the eldest verified man of the year 1909, upon surpassing Saturnino.

New photos (and a video) from today:

Have these photos been taken recently?

Have these photos been taken recently?

They were taken the day I posted them, since that was when a few of his relatives had visited. Some other photos which were taken earlier in the year were also posted on the Instagram page that day, but I didn't include them. 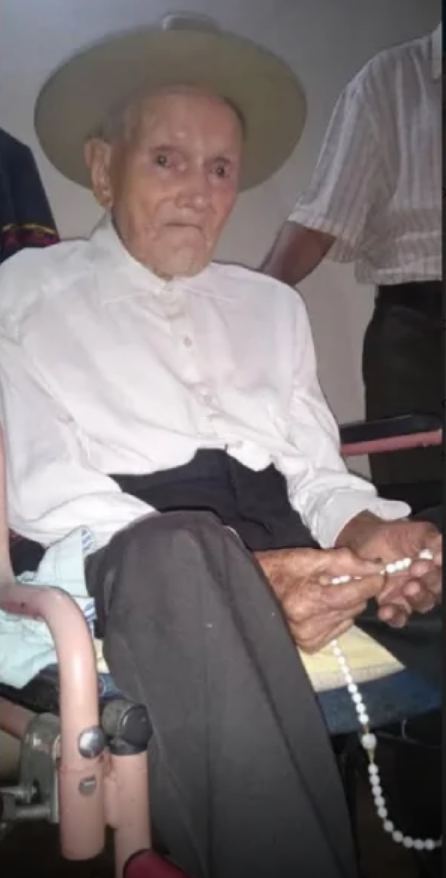 New video of few days ago:

Another new video of him:

Thank you very much for posting this.

Lets hope those teeth get get a few years of use 😀

@ale76 Getting a new ID card when you're 113 is probably quite rare.

This took him past James Sisnett and Wenceslao Gonzalez.

He is therefore now in the top 15 oldest verified men.

This takes him past the age of Maria do Sousa of Portugal (113-123), hence he now holds the record for being the oldest verified person born in 1909.

This is not necessarily something he'll hold onto over time - but for now it's his.

Photo posted by a family member on 30th September.

This surpasses the age of Frederick Frazier and moves Mr Mora into 14th position, on the list of the oldest verified men of all time.

This surpasses the age of Frederick Frazier and moves Mr Mora into 14th position, on the list of the oldest verified men of all time.

Yeahh he's going places! Frazier was (barring Matthew Beard, †114:222) the oldest man alive at the time of my birth. It's long seem to be a nice goal achieve to surpass him one day, pref. turning 114 🙂

Next stop: Masazo Nonaka. If he bridges this gap, he'll be, barring Gustav Gerneth, the oldest man since Kimura!

EDIT: No, how could I forget Yisrael Kristal? He's still 150 days away then. But still, he's been gone for 5 years too! Would be a great milestone imo.

Given the significant doubts around Mathew Beard, Frederick Frasier was probably also the WOMOAT for a time.

If so, this would have been from when he:

Too far off to be thinking about - but as you say Josia9353, he's certainly going places. I just wanted to share a pattern I noticed

It seems like one man born every decade breaks the record for oldest verified man ever. So continuing the pattern

This means that Juan Vicente Pérez Mora will be the next world record holder!

@aquanaut_chalk Matthew Beard is a seriously disputed case. I also wouldn't put too much faith in this alleged trend continuing. Jeanne Calment reached 122 in 1997 and still nobody has been close to reaching her age.

At this stage he's the last pre 1910 verified man - hence the last chance.

At this stage he's the last pre 1910 verified man - hence the last chance.

War-related, perhaps..? (I guess they were too young though.. Although some 15-y.o.'s fought in the trenches...)

New photo of him: